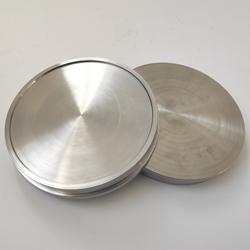 At present, aluminum targets for the domestic LCD industry are mainly dominated by Japanese-funded enterprises. In terms of foreign companies: Aifaco Electronic Materials Co., Ltd. occupies about 50% of the domestic market share.Secondly, Sumitomo Chemical also has a part of the market share. In terms of Domestic: Jiangfeng Electronics began to intervene in aluminum targets around 2013, and has been supplied in large quantities, and is a leading enterprise of domestic aluminum targets.In addition, Nanshan Aluminum, Xinjiang Zhonghe and other enterprises also have the capacity of high-purity aluminum production .

Molybdenum-niobium-10 alloy is an important alternative material for the diffusion barrier layer of thin-film transistors, and its market demand prospects are better.However, due to the great difference in the mutual diffusion coefficients of molybdenum atoms and niobium atoms, the position of niobium particles after high temperature sintering will produce large holes, and the sintering density is difficult to increase.In addition, the full diffusion of molybdenum atoms and niobium atoms will form a strong solid solution strengthening, resulting in deterioration of their calendering performance. However, Xi’an Ruiflair Tungsten Molybdenum Co., Ltd., a subsidiary of Western Metal Materials Co., Ltd., cooperates with AIFACO Electronic Materials (Suzhou) Co., Ltd. After many tests, the oxygen content of less than 1000 ×101 has been successfully rolled out in 2017, and the density has reached 99. 3% Mo-Nb alloy blank.